The people’s capacity to achieve is determined by their leader’s ability to empower.
– John Maxwell

Bart Starr, the former quarterback of the Green Bay Packers, was describing to a group of businessmen how his coach, Vince Lombardi, held absolute power. He stated that, as you entered Vince’s office, you noticed a huge mahogany desk with an impressive organization chart behind it on the wall.
The chart had a small block at the top in which was printed: “Vince Lombardi, Head Coach and General Manager.” A line came down from it to a very large block in which was printed, “Everybody Else!”

The success of Vince Lombardi as a coach is undisputable. Yet the sign described in his office is somewhat telling of his leadership attitude. So it’s time for some honest reflection. How do you see everybody else in your organization? Are they a means to an end? Are they disposable? As you recognize The Three Laws of “Everybody Else” it can take your leadership to a new level.

Law #1 – Everybody else is your foundation. Just as you have to learn in the process of life that you are not the center of the universe, so too, you must learn this principle in business. The organization or business is not built on you; it is built on everybody else. While you may have supplied the idea or vision, it was everybody else who bought- in to it that put you over the top.
The foundation of your organization is built one relationship and connection at a time. John Maxwell said, “To lead yourself, use your head; to lead others, use your heart. Always touch a person’s heart before you ask him for a hand.” And this is the secret of Law #1, relationships are the key to a strong foundation. 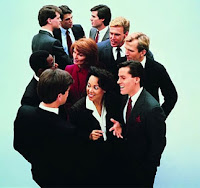 Law #2 – Everybody else is your inspiration. Without followers who have bought-in to your vision, you will not have a foundation upon which to move forward. Key to your success here rests in your team knowing that you have bought-in to them just as much as they have bought-in to you. When you surround yourself with the best and brightest you create an atmosphere where ideas thrive, creativity is encouraged, and possibilities are endless.
Warren Bennis said, “The leader finds greatness in the group, and he or she helps the members find it in themselves.” What a brilliant observation. The more you inspire others to discover and unleash the greatness that resides within them the more inspired they will become. The brilliance is found not when others always look to you for inspiration but when you help unleash it in everybody else. And this is the secret of Law # 2, the best ideas don’t always flow from your office; often time they flow to it.
Law # 3 – Everybody else shares in your destination. As you look at your team and the talent you are surrounded with; understand the power of this law – you share in a common destiny. When you connect helping hands and willing hearts, and build off a foundation of trust and vision, you will share a common destiny.

It’s doubtful that more than forty years ago anyone would have given two aspiring young entrepreneurs named Steve Jobs and Steve Wozniak any chance of success when they launched their fledgling company in Jobs’ bedroom. But as their ideas came together they expanded and relocated – to the garage. Through hard work, sacrifice, and determination, these two men shared a common destiny that would cause them to change the world.
The destiny of your organization is realized when everybody else buys-in to your vision, and when you buy-in to them. The realization of your destiny is found when everybody works together. And this is the secret of Law # 3 – your destination is not a place you go to alone, everybody goes together.
© 2011 Doug Dickerson